Things aren’t going to plan for Chelsea as they head into 2021 but that may be about to change against Manchester City.

Frank Lampard’s men have struggled of late with three defeats and a draw in their last five Premier League games.

The slump, it just so happens, coincides with the absence of Hakim Ziyech, through injury.

Now, though, ahead of a huge test against City, the Moroccan returns the first-team squad after his thigh problem and it can’t come a moment too soon, although he may have to settle for time on the bench to start with.

Lampard told reporters: “He’s fit to train and has trained the last two or three days so I’ll have to make the decision on whether he’s ready to start.”

Prior to the issue, which occurred in the 3-1 victory over Leeds on December 5, were unbeaten in all six other games he’d featured in, with three wins and three draws.

The game with City is at risk of postponement due to coronavirus cases at both club and a decision could potentially be made late on, as it was on Wednesday as Tottenham’s clash with Fulham was called off.

But currently, according to Lampard, all is go, despite worries about rising numbers of cases around the country.

“I haven’t been given the chances of the game being postponed this weekend, I’m just aware of the situation. At the moment the game is on,” he said.

“Manchester City had some positives within their training ground. We have had a couple ourselves, but not on the playing staff. That’s the current situation.”

When asked how safe players and staff feel in the current climate, Lampard said: “Generally probably as safe as the public because of the new surge in numbers we’re seeing.

“But we are in a more protected environment, certainly in the workplace. We’re now being tested twice a week and that’s really important. I don’t understand why we went down to one because two is important.

“It seems to me that the situation at the moment is that we go game by game. Games are being called off because of positive tests around the game itself and I understand that. Let’s see how it goes because these are uncertain times.”

Right-back Reece James is the only currently confirmed absentee for the Blues against Man City on Sunday.

Having a fine campaign, the youngster misses the match due to a small hamstring issue and should be replaced by Cesar Azpilicueta once again.

Ziyech has turned to training, as mentioned above, but a start may be out of the question.

Werner could return in place of Christian Pulisic, who has started the last four Premier League matches, while Callum Hudson-Odoi may continue and Tammy Abraham may replace Olivier Giroud.

Elsewhere, Matteo Kovacic could come in for Jorginho as Chelsea look to dominate in midfield. 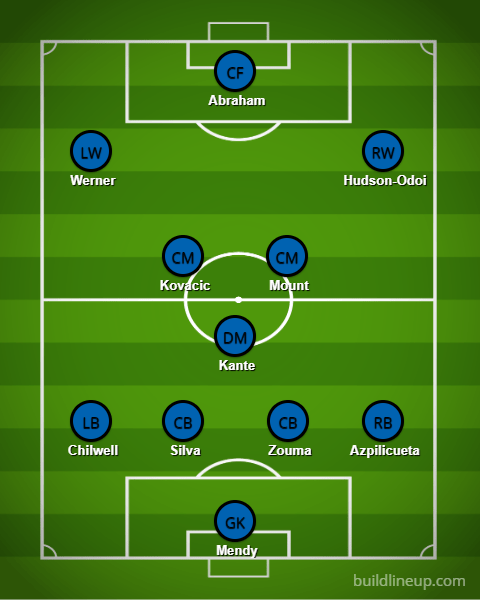