Manchester City continued their march towards the Premier League title with a 4-1 victory over Wolverhampton Wanderers at the Etihad to move 15 points clear at the top of the table.

City secured their 21st straight win in all competitions as Gabriel Jesus and Riyad Mahrez quickly extinguished any faint hopes of a Wolves revival after Conor Coady equalised in the second half.

Coady managed to score with Wolves’ first touch in the City box, which was also his first ever Premier League goal from his first ever shot on target.

However, hopes of an unlikely point from an unlikely scorer quickly dissipated when Jesus scored his 38th goal from 53 appearances in all competitions.

The Brazilian striker was entrusted with a starting berth in place of Sergio Aguero and justified his position by putting the hosts back in front after Coady cancelled out Leander Dendoncker’s own goal.

Mahrez made it 3-1 and Jesus then made sure of the victory when he tapped home after Rui Patricio spilled Ilkay Gundogan’s shot straight into the striker’s path.

City moved to 28 games without defeat in all competitions as they continue their incredible march to the Premier League title, the last time they went without defeat for such a long period was during incredible ‘Centurions’ season in 2017/18.

While parallels between this side and the team from three years ago will continue to be drawn, they have scored 55 goals and conceded eight goals during this record-equalling run.

City are romping towards the title and look like an unbeatable machine capable of claiming all four trophies available to them this season.

While this may not be a season to remember for Nuno Espirito Santo and his men, there is no shame to losing the champions-elect – a side so relentless in the pursuit of yet another Premier League trophy.

Despite their blistering form, Guardiola maintained the showdown with Manchester United was the only focus.

“Manchester United is the only care (now),” he said on BT Sport. “We are going to talk about the records and everything we have done in the league when it will be over, so (now it is all on) Manchester United.”

Guardiola added: “The champions are Liverpool. The crown belongs to them.

“We are in the best position right now to take them out, and we are going to try. 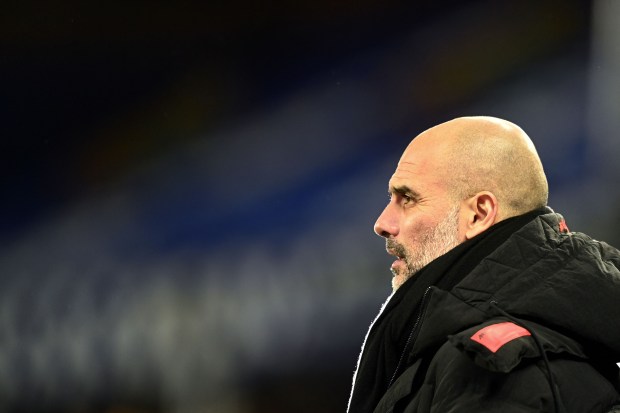 “We want to win it and then defend it for the whole of next season.

“Now it is about rest for everyone, especially mentally, because we do not have much time and next it is Man United at home.”